Perfectly located on the border between Normandy and Brittany, our hotel is the ideal place to stay to discover various exceptional sites.

Take advantage of Mont Saint-Michel’s proximity to admire this famous pilgrimage destination and its magnificent Benedictine abbey. Cross the bay on foot, accompanied by a guide, to view this extraordinary natural habitat with its distinctive flora and fauna.

Over a weekend or a longer holiday, you can follow the Breton and Norman coastlines to admire Granville, Cancale and Pointe du Grouin, Saint-Malo, Dinard, Dinan or set sail to discover the Chausey islands. 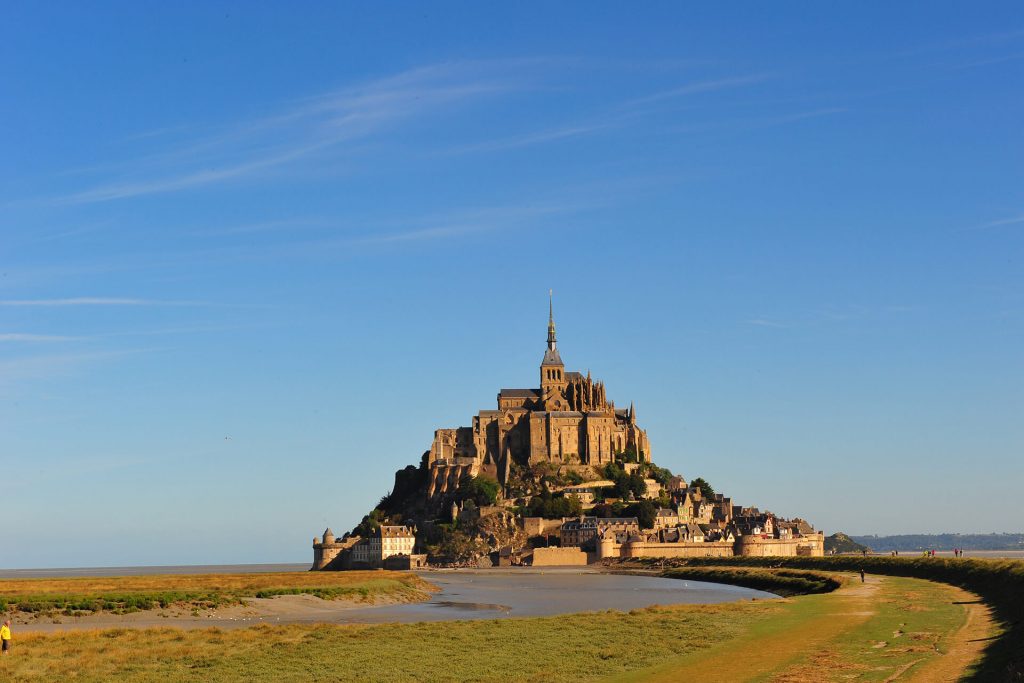 For a romantic weekend away, Mont Saint-Michel is undoubtedly a dream destination. Located 10 kilometres from Pontorson and our hotel, this marvel of Western art possesses an exceptional charm imbued with mystery and magic. Established following three dreams that Saint Aubert, the bishop of Avranches, had in 708 AD, Mont Saint-Michel was built over the centuries on a rocky island measuring just 960 metres in circumference.

The most recent buildings, a lodging wing on the abbey’s southern façade, were added in the 18th century. Registered as a UNSECO world heritage site in 1979, the city is the most popular tourist destination in Normandy. As you enter the city through Porte Bavole (1590) you will feel like you have stepped back in time.

The site’s only road is lined with medieval houses like Arcade House with is timber-framed walls or Maison de l’Artichaut (Artichoke house) that spans the road. At the end of the road, the Grand Degré staircase leads to the site’s crown jewel: the abbey, which is comprised of several buildings from different eras, but all equally impressive: Notre-Dame-Sous-Terre chapel, a former Carolingian church, the Romanesque abbey church, and the Merveille, a Gothic monastery with its fabulous cloister.

During your stay at our hotel, take the time to discover the pretty town of Pontorson. The municipality, which neighbours Mont Saint-Michel, takes its name from the Norman leader Orson, who built a bridge over the Couesnon in 1031. Originally called Pont d’Orson (Orson’s bridge) the name eventually changed into Pontorson.

Its western façade is particularly stunning with its portal and two Romanesque towers. Another major monument in the town is Guischard de la Ménardière house, also known as Romanesque house. Probably built starting in the 12th century and modified later on, this house still has a beautiful façade containing numerous windows. During your weekend in Normandy, you could also take advantage of the many marked trails near Pontorson to discover the area on foot. Explore Moidrey windmill, the flora and fauna of the marshlands, the polders and, following the banks of the River Couesnon, you can even reach Mont Saint-Michel on foot.

Our hotel, in the Manche department is the perfect place to stay to discover the beautiful region of Normandy. Around Mont Saint-Michel and its bay, there is no shortage of places to visit.

Explore Granville, an ancient pirate town transformed into a charming seaside resort. Named the “Monaco of the North”, it has a very easy going atmosphere with its pedestrian roads, the upper town and its ramparts. Around its fishing port, the biggest shellfish port in France, you can savour the tastes of the sea: scallops, whelks and clams. You can also set sail towards the Chausey islands, whose idyllic landscapes are a source of pride for the locals. Take advantage of your trip to Granville to stop off in Villedieu-les-Poêles. This pretty municipality, classed as a Ville et Métiers d’Art (Arts and Crafts City), has a very long tradition of copper and metalwork that goes back to the 12th century. This local expertise is still recognised today, as 8 of the 9 new bells for Notre-Dame cathedral in Paris were designed in one of the town’s workshops. Last but not least, take some time during your weekend to stroll along the paths in the Mortainais area. This is a great region for hiking and climbing, blessed with incredible natural beauty, thanks to its protected environment and waterfalls, as well as cultural beauty, with its many chapels, abbeys and churches the oldest of which dates back to the 7th century.